The global emergence of SARS-CoV-2 at the end of 2019 collectively shocked countless industries, especially those within aviation and travel. And like many, those of us at OSM Aviation were not left unshaken by the immediate and sharp decline of tourism, with virtually all regular operations coming to a near halt in March 2020. This left top management looking toward alternative means of business in order to assure that the company survived the pandemic’s rising ‘economic storm’.

Luckily, we were given the opportunity to immediately support our sister company, OSM Maritime, with the organization and execution of repatriation flights for their seafarer crew. However, this operation was unable to produce sustainable means on its own, which left the company to continue exploring further opportunities. It was around this time that our Technical Director Thom-Arne Norheim received a call that would indefinably change the course of OSM’s operations.

The call was coming from a large-scale leasing company headquartered in the United States, whose ventures include leasing aircrafts to airline customers worldwide. It was because of this exact reason that they were calling – the company had stranded aircrafts and were looking for someone to find a solution to their problem.

While we had not taken part in ferry flight operations prior, the idea was not entirely out of reach. Those of us working in Commercial and Flight Operations have a combined experience of over 150 years across various aviation segments and after a quick internal discussion it was unanimous: OSM was now in the business of repositioning aircrafts.

The first repositioning flights we accomplished were relatively straightforward, with two successful missions ferrying Airbus 321’s from Canada to Slovenia. Based on these successes, the leasing company assigned us their most critical and challenging repositioning flight yet – an A330 was stuck in Indonesia that needed saving.

However, along with the stark entrance of COVID-19 has come equally harsh restrictions or total bans on travel, with countries working diligently to combat the spread of the virus. Because of this, the idea of getting any air crew into Indonesia seemed impossible – until now.

The Jakarta repositioning flight had already seen many a challenge: with operations, planning, or the aircraft itself, as one issue would be solved only to have another arise. This, in addition to the many bureaucratic constraints, made achieving an execution date feel further and further away for our project team.

CrewMatch – Finding the right candidates for the job!

Initially, Flight Operations was able to use our internal recruitment system CrewMatch to successfully find qualified, local pilots who would be able to ferry the aircraft out of Indonesia to a designated ‘neutral’ location. Additional pilots would then be able to pick up and safely deliver the A330 to its final destination in Europe. It appeared that the mission was finally picking up.

Don’t miss out! Sign up for CrewMatch and become a part of our unique Crew Database!

Nevertheless, with further shortcomings on the aircraft’s side, the departure date was regrettably postponed and as a consequence, the local Captain’s rating expired, with no means of recurrence or extension through relevant authorities in due time.

Experiencing another setback, our project team worked persistently to create alternative solutions inside an exceptionally short deadline – all parties involved were now on high alert. Luckily, the idea of using European flight crew was still within reason.

As an alternative, we were able to find three Norway-based pilots selected to ferry the aircraft, in which they would passively fly into Kuala Lumpur and further on to Jakarta for pickup of the aircraft. After over six months of planning, the ferry flight was finally to be achieved.

However, as it would seem, our mission hit another snag when the pilots were denied boarding at Gardermoen Airport, as they were deemed not to possess the proper documentation for entrance to Jakarta. Feeling slightly deflated, our project team was once again on a quest to find a solution to get the three pilots to the aircraft.

With steely determination, the team was able to use their connections to secure a local charter company who would ensure passage for pilots from Kuala Lumpur to Jakarta. Our team also aligned with local authorities, enabling them to permit the pilots entry into both countries. With approval now on hand, the pilots were finally on their way to the long-awaited A330.

Successfully traveling into Malaysia, the crew were met by the local charter who safely transported the pilots to the aircraft’s location in Jakarta. After a brief waiting period for clearance, they were then able to secure the aircraft for its long journey back to Europe.

The journey home did not take them straight back to Europe, however. With a brief layover and a few minor hitches in Abu Dhabi, the pilots gathered some much-needed rest before their last leg wherein the aircraft finally, and victoriously, descended at Düsseldorf Airport, Germany.

We spoke with the flight crew following their return to Norway, to find out how their experience was working on such a challenging operation:

WHAT WAS THE MOST DIFFICULT AND/OR EXCITING PART OF EXECUTING THE FLIGHT FOR YOU?

“The biggest challenge overall was to get the aircraft to destination Düsseldorf before curfew 2300 local Saturday, with short rest periods on an aircraft we were not fully familiar with, Covid 19 restrictions everywhere, restrictions on visa, in an area we usually don’t fly and many other uncertainties. A small delay could have jeopardized the schedule.

The most exciting part was when we were picked up by a Hawker 400A business jet in Kuala Lumpur to fly into Jakarta, and when we were taken through the immigration system at Jakarta international in the middle of the night. There was also a bit of tension when starting up the aircraft the first time, would there be a technical problem delaying us…But all worked well and the A330-223 had no snags on ground and functioned as it should. MSN 1256 was in mint condition. A few minor ECAMs appeared after take-off but had no effect on the continuation.”– CP Bue

“The hardest part was getting into Jakarta during a pandemic…Civil Aviation is generally not very exciting, but {it was} a very good feeling of accomplishment being able to actually get the job done.” – FO Hofsli

“Making sure the paperwork was up to date and legal was the greatest challenge. With so many different entities involved in producing the documentation it took a lot of preparation to make sure we did not waste time and/or ended up not complying with Rules and Regs. {The most exciting was} lift-off from Jakarta after months of planning and hard work, and finally getting airborne. Especially after the aborted attempt on Sunday when we thought the mission was dead.” – CP Reagan

HOW WAS IT WORKING TOGETHER AS A FLIGHT CREW? HAD YOU WORKED TOGETHER PREVIOUSLY?

“We know each other well and have been working together prior to this mission. A lot of experience gathered in the cockpit during these flights. {Probably around} 50K flight hours.” – FO Hofsli

“We are an experienced A330 crew and we have flown together several times before, also on other aircraft types. Ray and I are also examiners and we both have experience from airline management.” — CP Bue

“We have worked together for several years and after a few months on furlough, working together was just great, like coming home.” – CP Reagan

HOW WAS IT WORKING WITH OSM?

“The backup and cooperation with OSM were excellent. We got all the aircraft documentation, flight planning and clearances, transfers and tickets, hotel, and transport details in necessary advance, so we could prepare and study in due time. In addition their support team was available day and night.” – CP Bue

“Fantastic. Very professional and with a truly relentless «never say die» attitude. The best part was that we never felt left to fend for ourselves. Support was always just a phone-call away.” – CP Reagan

WAS THE AREA(S) WHERE YOU WERE LOCATED TO FLY UNKNOWN TO YOU OR DID YOU HAVE PRIOR FLIGHT EXPERIENCE THERE FROM BEFORE?

“We had non or very little flight experience in the area of South Eastern Asia. But no worries, the ATC English standardization was good, CPDLC was widely used and the aircraft’s FMS AIRAC cycle was updated for the area. Information from colleagues flying for Turkish Airlines informed me that the airspace between Iran and Turkey had extensive jamming of GPS signals. So when we lost both GPS’s and ADSBs, we still had high accuracy navigation by IRSs until it all came back an hour into Turkey.” – CP Bue

“I had not been flying as far south as we did, but no big changes from normal operations once airborne.” – FO Hofsli

“I have flown in Europe and the middle East throughout my career, but Indonesia was a new experience. But aviation is so standardised now that it was impossible to notice any real difference.” – CP Reagan 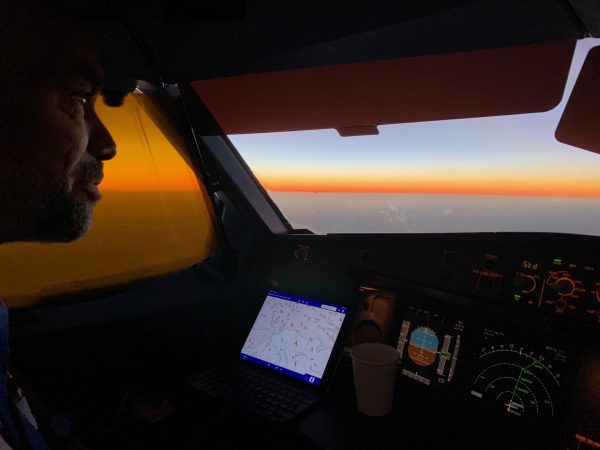 “Coming from a major airline, you are used to having all support available at all times. During this flight we had to do more of the ‘basic pilot stuff’ like exterior inspection, fueling and load/balance. Important to pay attention to the small details that is normally performed by others. Great training and a fun experience.” – FO Hofsli

“The planning, organization and execution required to get us onboard the aircraft was phenomenal due to the different effects of Covid-19. It was a nightmare with visas, Covid tests and documentation. Felt like a miracle when it worked in the end. Also the convective build-ups in the Bay of Bengal gave us some extra work.

Flying like this puts you in contact with professional people in new places that keeps the wheels of aviation turning, and you realise that we are one big family. Love it.” – CP Reagan

As of the date of this publication, OSM Aviation has successfully executed additional ferry flight missions, and many more are in line to be accomplished before end of 2020.

To stay up to date on all the happenings of OSM, sign up for our newsletter today!

WANT TO KNOW MORE ABOUT OUR SERVICE OF REPOSITIONING FLIGHTS?
CONTACT FREDRIK RANDGAARD

Do you need to get your colleagues home safely and cost-efficiently? Read more about OSM Aviation’s charter services and get a non-binding quote today.

Jun 15, 2019 7:39:38 AM Originally published at Lifeworks.com LifeWorks is an employee assistance and wellness programme brought to you and your family free of charge by your employer to help you manage personal and work issues. Pleas...